My friends and I have been sharing images of our first walks. Another dear friend I made through Rick Steves Europe, sent a picture of Michelangelo’s Pietà at St. Peter’s at the Vatican. Somehow that image kept resurfacing in my mind for a few days as something that had drifted very far from me, as if finding it again would require a different kind of journey I have been avoiding.

I stopped giving tours of the Vatican years ago.  I became convinced I lacked the filters, the adaptability, and the fortitude even, to deal with the crowds, and gave up. That picture of the Pietà took me back to where everything began, where I found the key and my voice as a guide. I started in my twenties, it took me a long time to wrap my mind around the ancient ruins and understand how I wanted to narrate them; the Borghese was closed for restoration back then so that came later. My story as a guide started with the Pietà, and if this crisis can also lead to personal growth or a rebirth of some kind, I needed to go back to it, and I did.

I arrive in Piazza San Pietro at 4:30 pm. The light is changing from the exhausting brightness of the middle of the day to the soothing golden glow of the afternoon when the whole city seems to exhale, one of the many things worth living for in Rome. The square is eerily deserted; the metal detectors under Bernini’s colonnade are all hidden by thin plastic covers that rustle in the breeze. I follow the new signs on the cobblestones that tell me how to proceed safely. A guard tells me where to stand and takes my temperature, we share a quick joke and laugh almost out of necessity, to affirm that these new rules and procedures don’t have to alienate us from each other, and we will make sure they don’t. 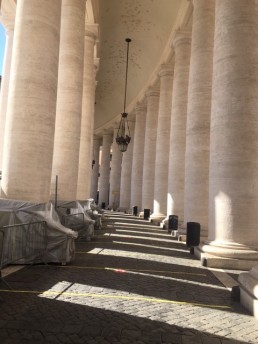 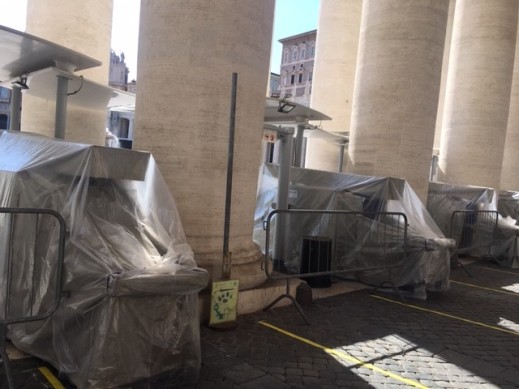 I go through security and enter. The basilica is empty, there seem to be less than thirty people wandering around, looking slightly stunned and hesitant. The first thing I notice is the quality of the silence and stillness; I don’t think I have ever experienced it before. The word I want is the Italian for “hushed” because it is so exact. We say silenzio ovattato from ovatta – cotton wool, the silence that feels wadded, dense. It somehow fills the immensity of the church interior, almost cramming it, making what is normally daunting and majestic, close and intimate. I allow myself to become porous and available to the silence, the space, the light. It is more than the oppressiveness of the past months lifting, for the first time I feel peace. 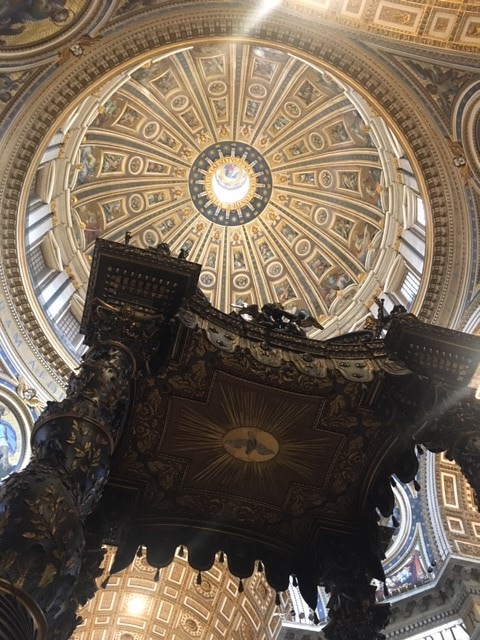 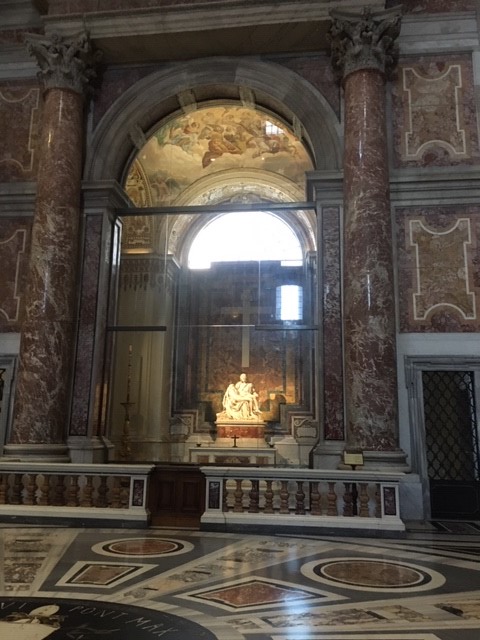 I am ready; I turn right and walk to the Pietà, alone.

I take my time, I allow my eyes to wander, as if looking at it afresh while rediscovering my deep familiarity with the details I love. I remember vaguely coming here with my Sicilian grandmother as a little kid, the small reproduction of it my father kept on his desk and have to smile at the web of connections Art creates in our lives.

This is Michelangelo’s Pietà, the work that permanently established his reputation here in Rome, the only work he every signed (he added his name on the sash across Mary’s chest when he overheard bystanders attribute it to someone else), and he was only 24 when he made it. Pietà doesn’t translate exactly as pity because it expresses nuances of sorrow and mercy as well. In art it is the title we give to this composition: Mary holding the body of her dead Son in her arms. It had been a more common theme in Northern European art – it was commissioned from Michelangelo by a French cardinal – and was typically represented with the body of Christ flat as a board, as in rigor mortis, on Mary’s lap, an allusion to the shape of the Cross. Observe how Michelangelo chooses a different approach and almost wraps the body of Christ around Mary.

You may remember how Michelangelo carved his statues out of a single block of marble, claiming that the statue was already in there, contained within the block, and that his task as an artist was to set it free. The technical implications of this approach have always fascinated me and a long tradition has consigned to us the idea of Michelangelo’s prodigious ability to “see” the three dimensional figure in the stone and attacking it mostly from the front. It may not be possible to reconstruct his artistic process exactly but part of me longs to indulge in that tradition and its powerfully evocative image. I love to imagine his statues as we see them now but lying in a tub full of water, picturing the plug being pulled from the drain and watching the water slowly recede to reveal them, bringing them to life. What matters in the end is that through the work of Michelangelo’s hands, the roughing out, carving and endless polishing, a rough block of marble from the Tuscan mountains becomes what we are looking at here. And he was 24 years old.

As we continue observing, something else draws our attention: Mary looks rather young and she seems quite large compared to her Son. If we could imagine them standing, she would be much taller than him. When asked about Mary’s youth Michelangelo replied that as the Virgin mother of Christ, Mary remained eternally young and beautiful. Separating Michelangelo from his faith can limit our understanding, and I don’t think we need to be religious ourselves to access this dimension. The proportions certainly make the embrace appear more natural and believable.

We could perhaps stop here but I want to share what I was taught about this statue in high school and that has been marinating in my brain for what now feels like a lifetime.  It has allowed me to understand how Art is above all communication and how ideas expressed visually 500 years ago can accompany and sustain us on our life path today, creating empathetic connections across space and time. I offer it as a possibility for your consideration, nothing more.

The age and scale factors become effective and especially poignant if we imagine that in the Pietà Mary is holding her baby son in her arms, and is experiencing a moment of foreshadowing; she sees that when he becomes an adult, her Son must die to save humanity. How does Mary react? Let’s allow the overall mood of the statue to reach us, and then let us look at Mary’s hands. With her right hand she is holding onto her Son, as if she didn’t want to let go of him: this is the grief of every mother for every lost child and, and at this point in my life, I think it can be the grief of all of us when we lose someone we love. People come to see this statue from all over the world, with different backgrounds and beliefs, and I sense that everyone feels it has something to say to them personally. Art unites and connects us in the fundamentals of the human experience, one of the many reasons we should always have it in our lives.

We move to Mary’s left hand: it is open, a gesture of acceptance and offering, as if she knows that what she envisions will happen on Friday but Sunday will come, and Life will return. Mary looks at peace; Christ looks more asleep than dead, the wounds from the nails of the cross are hardly visible. Under his lifted foot is a little plant, just starting to grow. Life is never destroyed, Life changes.

Never again will Michelangelo make something quite so polished, so finished. I have looked at the Pietà my whole life and still marvel at his technique in rendering the wrinkled fabric of Mary’s blouse around the sash, the perfect sheen of the skin, the empty space under Christ’s hip, the almost unbearable tenderness of it all.

Today the glass that protects the Pietà and separates us from it seems ironically timely, and yet the statue glows unperturbed. Life continues in this dimension too, we survive and move on.

I walk away reconnected with my own story, grateful and consoled.

Next time, a late afternoon passeggiata through the centro storico.