In spite of everything that is happening so close to me here and that I am trying hard to comprehend, I am relieved to be closer to my American loved ones. The intense greens and primordial quality of Seattle’s great trees and the summer sky reflecting off the lakes captivate me every day. As a city guide, I am accustomed to searching for the life of inanimate, man-made objects. It is magical to be exposed to the vital energy of Nature on such a grand scale here. I like the idea of being inhabited by both American
Nature and Roman Art, of “containing multitudes” (grazie Walt Whitman and Bob Dylan!).

And Rome is always there; my mind wanders back there constantly.

Giovanna sent me a message to share she was about to take an Italian couple on a tour of the Capitoline Museums (first museum in history, extraordinary Ancient Roman art in an extraordinary setting), and that brought to mind my first walk through there after the lockdown. I would like to take you on a “visit in three glimpses and three posts”: the Capitoline Hill (context), the Museum space (the container) and the Art (content).
I went with my wonderful friend Ilaria Ceccarelli with whom I share my Rick Steves Europe work and guiding principles. 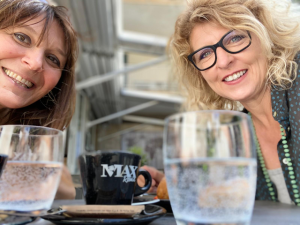 Here we are having our first “caffè al tavolo”, coffee sitting down at the cafe. No more take away cappuccino for us!

We cross the Circus Maximus and the little neighborhood at the foot of the Capitoline Hill. We start climbing up the most important of the Seven Hills of Rome that gave us the word capitol and offers some of the most beautiful views of the archaeological area (Forum, Palatine hill, Colosseum). 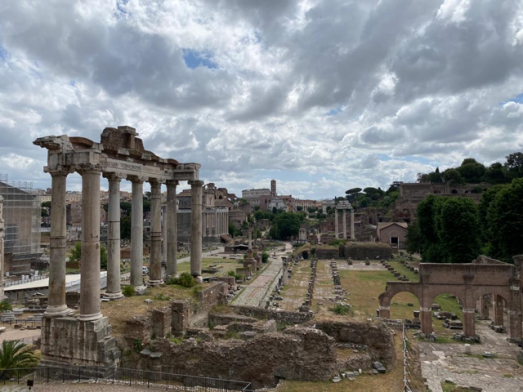 It was from here that traitors were hurled off to their deaths in ancient times, and where the honking of the geese of legend warned the besieged Romans who had sought refuge on its heights that the enemy was approaching, saving them – just to mention a couple of stories we were told over and over again in school.

We mentally nod in acknowledgement to the Genius Loci – the Spirit of the Place. This was a guardian deity for the Romans, assigned to protect a place, its inhabitants, and people just passing through; for noi moderni – us moderns, it defines the distinctive character of a location. As I always invite you to do, we practice Roman time-lapse, and envision the centuries swirling around us as we try to catch even the faintest and most distant echoes of the past.
Religious heart of ancient Rome 2000 years ago, when it was a city of over a million and the center of an empire of 50-60 million people, il Campidoglio was covered with temples and a multitude of shrines and altars. We picture Roman generals and emperors reaching its summit on their ceremonial chariots at end of the triumphal parades that displayed and proved their conquests to cheering crowds of citizens,  alighting and offering their laurel crown at the most important temple in the city, dedicated to Jupiter
Optimus Maximus, to give thanks for divine protection in war.

Then came the fall of the Empire and as the population dwindled to 20-30.000, Capitoline Hill eventually became known as “Goat Hill”. The urban fabric of Rome included within the perimeter of its 3rd century walls disintegrated into a patchwork of small, densely inhabited areas and vast stretches of open fields and pastureland speckled with the skeletal remains of abandoned ancient structures.
We evoke the all too common practice of tearing down ancient buildings to re-utilize them as construction material for new residences and churches, turning the splendor of Roma Caput Mundi (Rome head of the world) into desolate ruins, as people carted off marble blocks and columns, and fed marble statues into kilns to burn them and reduce them to lime, then used to make cement. This went on for centuries and is the main reason so much is gone.

Nostalgia for things that seem lost to us now has become quite prevalent in this crisis; Ilaria and I amplify it to include nostalgia for something we never saw: our city at its ancient peak, a place, we learned with absolute wonder, where there might have been as many as one statue for every two people! We pause to imagine a veritable forest of statues, of marble people alongside living people, sharing the same urban space. We dream of a time-machine that would enable us to see if for just one moment and ache for all that was lost by becoming materiale di spoglio – spoliation material for new buildings. I find spoliation to be an appropriately dramatic word as it defines the reckless destruction that went with re-purposing.

Yet for me Rome offers spectacular evidence of that wonderful line spoken by a Japanese Daruma doll in a play I came across in my university years. I completely forgot what the play was about or what it even was, but I copied the line in the notebook of quotes I collected in my search for guidance and meaning as I tried to figure out my path (I still do that): “Life is falling down seven times and getting up eight times”.

So we see the Capitoline Hill rise to prominence again as the seat of civic government was established here in 12th century, a proud though ineffective secular alternative to the rising power of the popes who ruled Rome as monarchs until the unification of Italy in the 1800s. City Hall still stands there, a thousand years later. We all love the sudden bursts of cheering and applause when newlyweds emerge from the wedding office to be hugged and kissed by their family and friends in all their finery, and then pose for pictures. We love to see bridal veils fluttering in the wind against the spectacular backdrop of the Capitoline’s last metamorphosis. 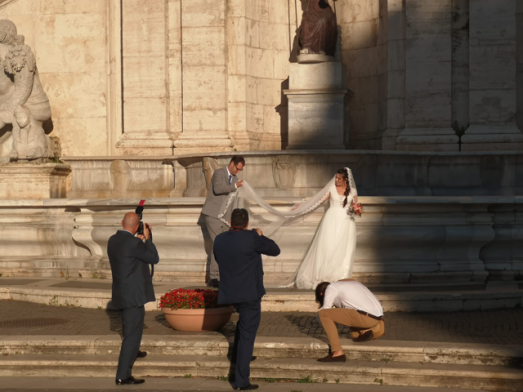 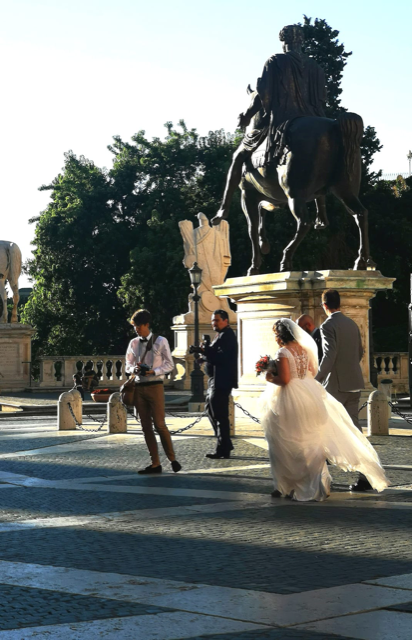 [These pictures and the last one on this post were taken by our friend and RSE local guide colleague Alessandra Mazzocoli. She has a wonderful eye for photography and for Rome. See her work on her facebook page A Zonzo: rambles in Rome].

The Piazza del Campidoglio as it appears today is one of the most elegant squares in Europe. It was designed by Michelangelo (1530s) although it was completed in later times. He devised its brilliant trapezoidal shape that brought symmetry where the preexisting structures had none, and the starburst design on the pavement. The copy of the bronze equestrian statue of the philosopher emperor Marcus Aurelius (121-180 AD) stands at the center – the original is inside the museum, safe from pollution and pigeons. Marcus turns his back on the Roman Forum, the Colosseum, the imperial palace, the core of the ancient Rome behind City Hall, and faces the Rome of the popes that gradually took its place, the Rome of St. Peter’s and the Vatican, in the distance in a straight line from here. 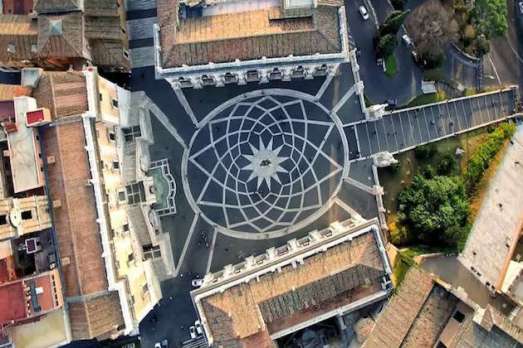 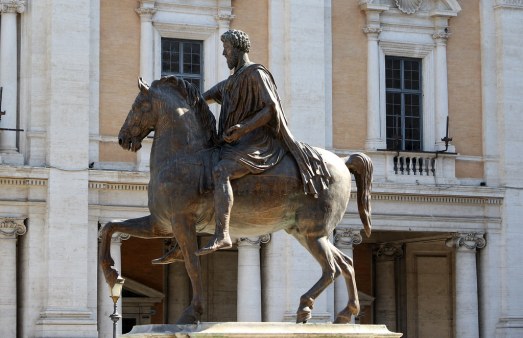 The City shifts, changes and follows Power; it weaves the threads of a story we can discover and read in the stones so they can cease to be foreign and intimidating. Edward Gibbon famously wrote about part of that story in his Decline and Fall of the Roman Empire, and found inspiration here. In his Autobiography he claimed:

“It was at Rome, on the 15th of October 1764, as I sat musing amid the ruins of the capitol, while the bare-footed friars were singing vespers in the temple of Jupiter, that the idea of writing the decline and fall of the city first started to my mind.”

Next time I would like to share the ideas on navigating museums Ilaria and I discussed  while at the Capitoline.

I say goodbye to you with a quote that conjures wonderful mental images of this Roman hill for me.

“In all cities there are certain places, a church or a garden, where one may go as to a sanctuary in moments of happiness or sorrow; and in spite of its grand and stormy memories, this piazza on the Capitol is such a place to me. The centuries lap at its feet and roll away in stormy vistas all around it, and the rock of the Capitol, where the philosopher rides his golden horse, is lifted like some ark above the flood of time.” 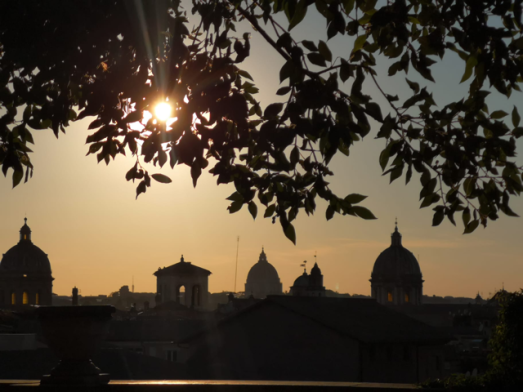 I would like to thank Ilaria Ceccarelli and Alessandra Mazzoccoli for their pictures and Ben Cameron for helping me start this blog and persevere.

Copyright © 2020 - Francesca Caruso. All rights reserved. Please don't use the photos without permission. Grazie!
%d bloggers like this: